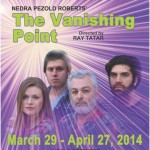 California Stage is one of six theaters in the United States chosen to present an award-winning world premiere from the American Association of Community Theaters’ first annual AACTNewPlayFest.  The Vanishing Point by Nedra Pezold Roberts, chosen from 250 entries, tells the powerful story of one family in danger of disintegrating almost as quickly as the fragile Louisiana bayous on which they’ve depended for centuries. The play will open March 29th to run five weekends through April 27th, 2014 and will be directed by Ray Tatar. END_OF_DOCUMENT_TOKEN_TO_BE_REPLACED