Darby O’Gill and the Banshee’s Halloween 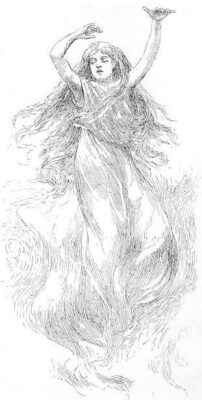 “The Banshee hails death. She comes in three  forms; the first being a young woman, the second  a middle-aged matron, and the third being of a fragile old woman seen as washing the bloodstains out of a fated persons clothing.”

Mark Lyon is a Master storyteller. He appears as a charming leprechaun of a man, with rosy cheeks and an authentic Irish brogue.

The hour spent with him in the Three Penny Theatre is an hour of pure delight. His stories of the Little People are told in such a way, that who cannot believe every word? His voice changes with each character, and he becomes that character.  His dramatic pauses leave us breathless for his next sentence as we move toward the story’s climax. But he never hurries, just spins the story out in its own time.

Wherever we live, that bit of romantic Ireland seems to be with us. Lyon appears more connected to the Old Country than to his present life in California. And that is pure joy for his audience.