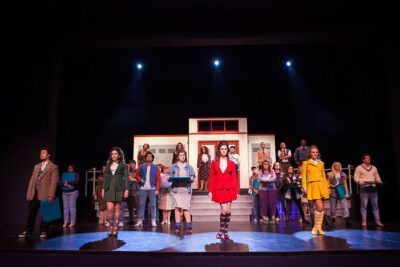 In 1948 in Little Rock, Arkansas, the post-war boom is still a dream for the Munson Family.  Mama Loshie won’t let go of her son, Harvie, and Harvie’s new wife, Ruth, won’t quit pushing to get out of Little Rock.  An all-too-human exploration of the power of lies and love.  Directed by Richard Winters.

A tale of love, lust and a somewhat “magical” intervention from an unlikely participant!  An early play from the screenwriter of “Moonstruck”.  Directed by Janis Stevens.

Explores Ronald Reagan’s youth, his careers in radio and Hollywood and his unlikely rise in politics.  Eleven different characters tell some of the more unusual stories surrounding this complex and influential person — at his very best and at his worst.  Conceived and staged by Joel Mario Rickert.

December 17th – WORK IN PROGRESS by Susan Andrews in the Wilkerson

A combination social/romantic comedy.  The characters are seniors with young sensibilities.  They have dreams and vitality and a sense of humor and they refuse to concede to cultural expectations!  Directed by Janis Stevens.

Tickets: $10 cash at the door or order here.