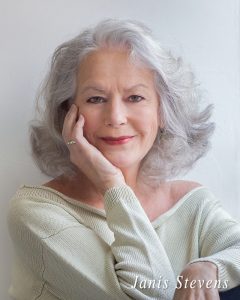 Janis received the Elly’s Lifetime Achievement Award in 2015 and has been an Adjunct Professor of Theatre Arts at American River College since 2003. She received her MFA from Ohio University’s Professional Actor Training Program and began her professional career at the Old Globe in San Diego. She worked in the English-speaking theatres of Vienna, Austria for ten years.

Janis has been also a Drama Desk Nominee for her portrayal of Vivien Leigh in the off-off Broadway production of VIVIEN, a role for which she also received the Bay Area’s Dean Goodman Choice Award for Solo Performance. She is a Resident Company Member of the Theater at Monmouth in Maine where she directs and performs during the summertime. Her work as a director has also received much acclaim across the country and she is extremely proud to be a member of Actors’ Equity.