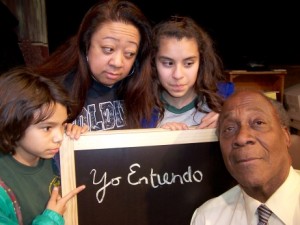 In Los Angeles, the African-American Ghetto runs right into the Latino Barrio. Watts, one of the densest populated areas in Southern California rife with crime, meets the Barrio, “East-Los,” where gangs hold turf and the night air rings with sirens. This is where playwright Leslie David Perry has set his new play entitled, “Learning Spanish.”

Producer/Director Ray Tatar says that “Mr. Perry’s new play is a touching story about how two people of different races and ages attempt to escape the epidemic of anger and violence that surrounds them.”

Leslie Perry has been an educator, actor, producer, director and writer. Perry began his artistic life in the theatre by directing and writing plays in many colleges and universities. He pioneered African-American protest theatre, as well as taught at the University of California, Berkeley. Later in life, he became a master storyteller and has been educating and entertaining audiences for over 30 years.